// N + S // Getting married in Umbria: the destination wedding of Nicoleta and Samuel – Borgo Colognola – Perugia

Umbria is one of the smallest regions of Italy, it enjoys a strategic position because it is located in the heart of our peninsula. It is surrounded by a hilly landscape and offers romantic stays. For this reason it is considered one of the most popular regions for the celebration of luxury and destination weddings. Many foreign couples choose to celebrate their wedding in this region thanks to the presence of ancient villages, medieval castles, views and very suggestive corners.

To celebrate their wedding, Nicoleta and Samuel have chosen Borgo Colognola, a historic residence located in the province of Perugia. The dwelling became famous for being the setting of the Fox Life series“The farmer seeks wife”. This wedding location is an exclusive location for weddings surrounded by the countryside and it satisfies both rustic and refined tastes.

The region is the magical place to spend the unforgettable moments of the wedding day. The open-eyed dream of Nicoleta and Samuel was filmed by the attentive eyes of our videographers who were inevitably involved by the magical atmosphere of the moment.

The bride arrived with her father and at a determined pace she walked to reach her groom. Nicoleta and Samuel sealed their union with a civil rite celebrated inside Borgo Colognola, with an altar decorated for the occasion and placed in a large open-air courtyard located in the center of the location. Surrounded by the dearest affections, who arrived in Umbria for the happy event, were moved, shed tears of joy and pronounced the formula of marriage that unites them forever.

The reception was held under the starry sky, in the central square of the location set up with round and white tables, floral compositions composed of fragrant roses placed on the tables and chairs of each guest. These details have made the setting richly decorated in a refined manner.

The thing that most impressed us videographers of Tears Wedding Film was the smile of Nicoleta and Samuel. Every moment, starting from the preparations of the spouses performed in the rooms of Borgo Colognola, was characterized by the sweetness and romance of the married couple.

The magic continued until the inevitable moment of cutting the wedding cake and this marked the end of a perfect day for Nicoleta and Samuel and for their guests arrived from far away.

Nicoleta and Samuel have lived the most beautiful day of life, they have promised to love each other forever and we can only wish them that everything they desire becomes reality. Have a good life together. 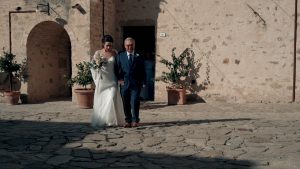 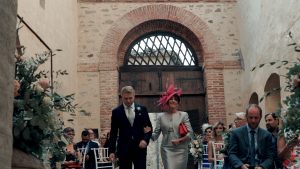 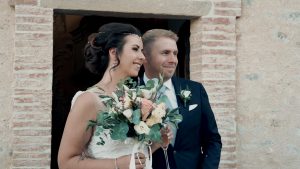 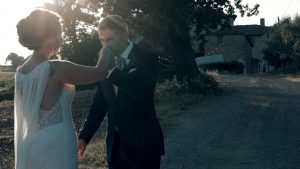 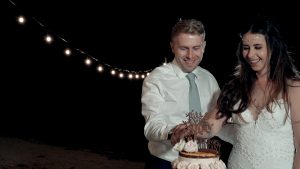